Mr Lagattolla is an independently practicing surgeon based in the central South-West and offers clinic consultations at several sites, whilst being based mainly in Poole and Dorchester.

Mr Lagattolla qualified from Nottingham University in 1985 and spent his training years in and around London, based mostly at Guys and St Thomas’ Hospitals where he learned and undertook the spectrum of general and vascular surgery.

He became a consultant surgeon at the Dorset County Hospital in 1999 in general, endocrine and vascular surgery, where he was very successful and popular. After 15 years on the front line of elective and emergency surgery he became an independent surgeon, specialising in endovenous treatment for varicose veins, hernia surgery,  and thyroid disease.

He holds regular tutorial and clinical sessions to instruct GPs and technical company representatives, he has taught general vascular and endocrine surgery to medical trainers to a high level, and he holds four weekly clinics for outpatients, and three operating lists each week, and looks forward to welcoming you warmly to one of these. 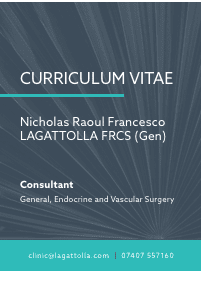 The current audit being addressed is a patient-oriented critical long-term outcome of single puncture treatment of the saphenous trunks (without phlebectomies) for the treatment of wide superficial varices.
Read More >
16th
Jul

If the BVP website is quoted there will be reduced consultation fees in those clients who progress to undergoing truncal venous treatment for varicose veins (by reimbursement at treatment stage).
Read More >
View All News